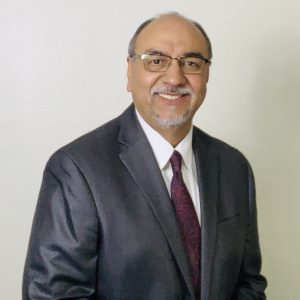 Rev Dr. Eduardo (Eddie) Rivera was born in Monterrey, Mexico, and raised in a clergy Methodist family. He received God’s Call to ordained ministry in the summer of 1979, and was ordained an Elder of the Methodist Church of Mexico in 1988. He transferred his credentials to the New Mexico Conference of The United Methodist Church in 1998.

He attended the Lydia Patterson Institute in El Paso, Texas, where he learned English. He earned a Bachelor of Theology Degree (B.Th.) from the Seminario Metodista Juan Wesley in Monterrey, Mexico, in 1985, a Master of Theology Degree (Th.M.) in 1992, and a Doctor of Ministry Degree (D.Min.) in 1997. His graduate work was completed at the Candler School of Theology at Emory University in Atlanta, GA.

Rivera has served in full-time ministry for almost 40 years in both Mexico and the United States, ministering in the Conferencia Anual Oriental (Mexico), Southern Illinois Conference (now Illinois Great Rivers Conference), the Northwest Texas Conference (NWTX), and in the New Mexico Conference. While in the NWTX Conference, Rivera served four years as the Senior Pastor of St. Paul UMC in Abilene, Texas. As a member of the New Mexico Conference, he has pastored various churches, served five years as the El Paso District Superintendent, and now serves as the Conference’s Provost and Director of Church Vitality.

Rivera is married to Hilda, a retired professional educator. Their daughter Lizet and son-in-law Derek Dickinson are attorneys who live and work in Nashville, TN. They are proud grandparents of four-year-old Olivia.