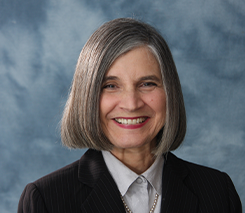 University President
Board Member: 2013 to present

Dr. Sandra S. Harper, a native of Dallas, Texas, began serving as the president of McMurry University on October 1, 2013. Prior to her McMurry appointment, Harper served as the president of Our Lady of the Lake College in Baton Rouge, Louisiana from 2006 to 2013 and as the provost and vice president for academic affairs and professor of communication at Texas A&M University-Corpus Christi from 1998 to 2006. Harper’s other administrative posts included serving as the vice president for academic affairs at Oklahoma City University and as the dean of the College of Arts and Sciences at McMurry. Harper served as a faculty member in the communication and theatre department at McMurry from 1985 to 1995.

She is married to Dave Harper, who coached at Abilene High School for nine years and other high schools in Texas, Oklahoma, and Louisiana. The couple has two sons, who spent most of their childhood in Abilene. Justin Harper, a lieutenant colonel in the United States Army, his wife, and four children, is stationed in Norfolk, Virginia. Jonathan Harper works for the City of Commerce, Texas, where he lives with his wife and sons.