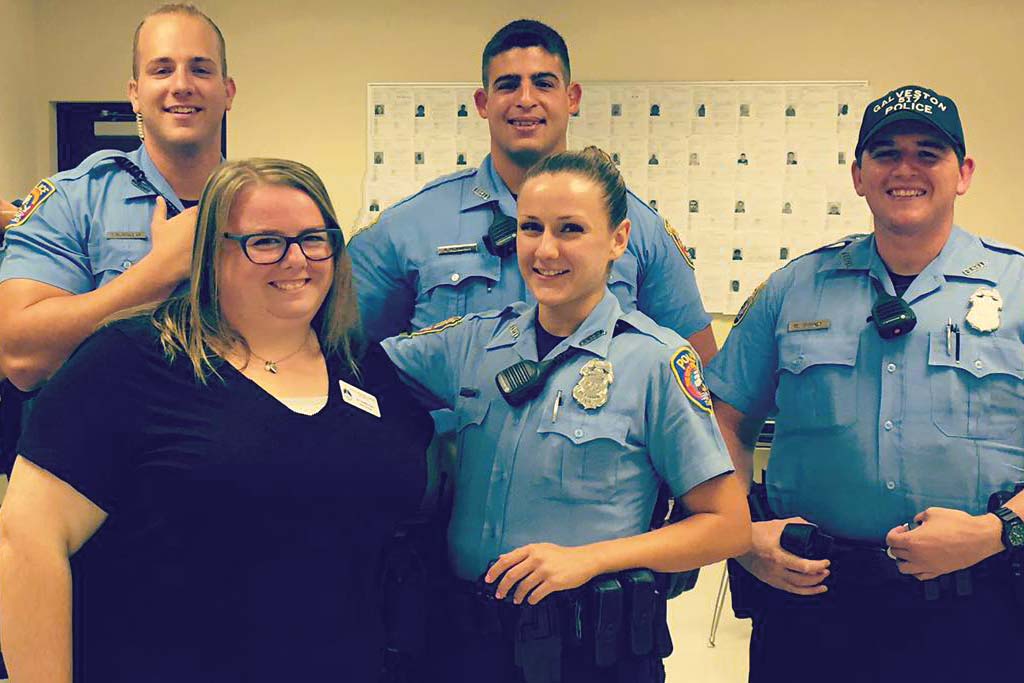 Heather Gates ’04—an ordained deacon in the United Methodist Church serves as lead chaplain for the Galveston Police Department, providing a ministry of presence to officers, dispatchers, civilian employees, and their families. She also provides support on calls or at scenes to community members experiencing tragedy or death.

How did you get started in a career in your current sector / industry?
Being a law enforcement chaplain is never something I envisioned for myself. I began interacting with some of the officers who were hired to work an extra job at the church where I was serving. One of the officers spoke to me about a team of various professionals that he wanted to build to help the officers on calls. He told me he thought it would be great if I was part of that team and asked me to come on a ride along. It took me a while to come around to the idea, but finally I said yes. I rode with all of the officers who worked the church and planned to be done at that point. The final night I was asked to help with a death notification and it impacted me in a very personal way. After that ride along I could sense that this was something God was calling me to pursue, so I began as a volunteer chaplain in 2016 and then it became my full-time job in the fall of 2018.

Briefly walk us through your career journey to this point.
When I graduated from McMurry in December 2004, I was headed straight for youth ministry and assumed that was where I would be for the majority of my career. I moved to League City, TX in 2005 and accepted my first paid position as a youth director. Three years later, I moved to a different church in Galveston to a different position in youth ministry. I started seminary while at Moody Methodist and went through the ordination process. I still saw myself in youth ministry for several years or maybe moving into pastoral care, but never considered work outside of the church. Once I learned of the many opportunities with law enforcement, I got really excited about making a change. In 2017 I became an ordained deacon in full connection, and chaplaincy provided a great new way to live out pastoral ministry.

What do you most enjoy about your sector / industry / job?
The opportunity to walk the civilian and the officer sides of the thin blue line is an amazing one. To have the civilian perspective and the officer’s perspective is very helpful. I love the raw and vulnerable conversations that I get to have with the officers. They know that they can come in my office, close the door, and talk about whatever they need to talk about. Some have come in to shed tears over a call, others have come in to ask very deep theological questions, and some just drop by for a snack and a quick chat. It such an honor to get invited into those spaces with the officers. I have gotten to do almost 20 weddings for the department and that has been so special. To get to officiate the ceremony for the officers is such a joy. I am so grateful for the way they love and care for me. Being a part of the law enforcement family is something that is hard to describe. I have never felt more protected and encouraged. So often I feel that they do so much more for me than I could ever do for them. It is awesome to walk alongside the families. Many of the spouses have felt comfortable texting and asking for support for themselves. Others have texted asking me to check in on their officer because something seemed off and hoped the officer would talk to me.

How is your current career the same, or different, than what you thought it would be when you began college?
In college this is not what I would have pictured at all, but I can see how the whole road led to this point. Things like the servant leadership program at McMurry helped to set a great foundation to go into the different areas of ministry. Youth ministry gave me an avenue to grow into the person I needed to be to even consider chaplaincy. The situations the students encountered helped me to learn to be present and not to always try to solve the problem. I learned to be comfortable with silence and saw more of the pain in the world. My time in seminary challenged my faith and strengthened my theological perspectives. I would not be able to have the conversations with the officers that I do without that training.

What words of advice do you have for McMurry students or fellow alumni interested in a career in your sector or industry?
If you are interested in supporting law enforcement and caring for their overall health, there are so many avenues you can take. Finding a paid chaplain position is not always an option, but it is not the only way to help. Consider becoming a counselor who specializes in trauma or PTSD and get trained in interventions that are proven to help law enforcement. Look into being a social worker who can respond to scenes alongside officers or advocate for policies that will better provide for their mental health. Become a pastor of a church that seeks to support officers in your local community. Those are just a few suggestions. Whatever you do, there is a way that you can connect yourself to your local police department and be a partner in the work they are doing.